By Jimmy Johnson and Linda Quiquivix
Global Research, May 24, 2013
Electronic Intifada 21 May 2013 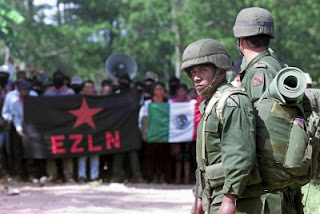 Earlier this month, Jorge Luis Llaven Abarca, Mexico’s newly-appointed secretary of public security in Chiapas, announced that discussions had taken place between his office and the Israeli defense ministry. The two countries talked about security coordination at the level of police, prisons and effective use of technology (“Israeli military will train Chiapas police,” Excelsior, 8 May [Spanish]).

Chiapas is home to the Zapatistas (Ejército Zapatista de Liberación Nacional), a mostly indigenous Maya liberation movement that has enjoyed global grassroots support since it rose up against the Mexican government in 1994. The Zapatistas took back large tracts of land on which they have since built subsistence cooperatives, autonomous schools, collectivized clinics and other democratic community structures.

In the twenty years since the uprising, the Mexican government has not ceased its counterinsurgency programs in Chiapas. When Llaven Abarca was announced as security head in December, human rights organizations voiced concerns that the violence would escalate, pointing to his history of arbitrary detentions, use of public force, criminal preventive detentions, death threats and torture (“Concern about the appointment of Jorge Luis Llaven Abarca as Secretary of Public Security in Chiapas,” Fray Bartolomé de Las Casas (Frayba) Center for Human Rights,14 December 2012 [PDF, Spanish]).

Aptly, his recent contacts with Israeli personnel were “aimed at sharing experiences,” Abarca has claimed. This may be the first time the Mexican government has gone public about military coordination with Israelis in Chiapas. Yet the agreement is only the latest in Israel’s longer history of military exports to the region, an industry spawned from experiences in the conquest and pacification of Palestine.

The first Zionist militias (Bar Giora and HaShomer) were formed to advance the settlement of Palestinian land. Another Zionist militia, the Haganah — the precursor to the Israeli army and the successor of HaShomer — began importing and producing arms in 1920.

Israeli firms began exporting weapons in the 1950s to Latin America, including to Nicaragua and the Dominican Republic under the Somoza and Trujillo dictatorships. Massive government investment in the arms industry followed the 1967 War and the ensuing French arms embargo. Israeli arms, police, military training and equipment have now been sent to at least 140 countries, including to Guatemala in the 1980s under Efraín Ríos Montt, the former dictator recently convicted of genocide against the Maya.

Mexico began receiving Israeli weaponry in 1973 with the sale of five Arava planes fromIsrael Aerospace Industries. Throughout the 1970s and ’80s, infrequent exports continued to the country in the form of small arms, mortars and electronic fences. Sales escalated in the early 2000s, according to research that we have undertaken.

According to declassified Defense Intelligence Agency documents [PDF] obtained via a freedom of information request, Israeli personnel were discreetly sent into Chiapas in response to the 1994 Zapatista uprising for the purpose of “providing training to Mexican military and police forces.”

The Mexican government also made use of the Arava aircraft to deploy its Airborne Special Forces Group (Grupo Aeromóvil de Fuerzas Especiales, or GAFE). GAFE commandos were themselves trained by Israel and the US. Several would later desert the GAFE and go on to create “Los Zetas,” currently Mexico’s most powerful and violent drug cartel (“Los Zetas and Mexico’s Transnational Drug War,” World Politics Review, 25 December 2009).

Mexico was surprised by the Zapatistas, who rose up the day the North American Free Trade Agreement went into effect. The Mexican government found itself needing to respond to the dictates of foreign investors, as a famously-leaked Chase-Manhattan Bank memo revealed: “While Chiapas, in our opinion, does not pose a fundamental threat to Mexican political stability, it is perceived to be so by many in the investment community. The government will need to eliminate the Zapatistas to demonstrate their effective control of the national territory and of security policy.”

Today, faced with a people in open rebellion against their own annihilation, the perception of stability continues to be an important modus operandi for the Mexican government. For Israel, the Oslo “peace process” and the Palestinian Authority’s neoliberal turn has similarly helped cultivate an illusory perception of peace and stability while the colonization of Palestine continues.

Indeed, “creating an atmosphere of stability” was the stated goal of the recent Mexico-Israel contacts, and the desire for at least the perception of it might help explain why an Israeli presence in Chiapas is now going public, or rather, according to journalist Naomi Klein, is being “marketed.”

Yet managing perceptions can only remain the short-term goal of governments whose shared ambition is to annihilate. And just as Israel shares with Mexico its military experiences against Palestinians, it is equally likely that Israel could apply some of Mexico’s counterinsurgency tactics to its oppression of the the Palestinian people.

The military relationship between Israel and Mexico is how the Zapatistas themselves have long recognized their connection to the Palestinian struggle.

This message was underscored by Zapatista spokesman Subcomandante Insurgente Marcos when Israel was bombing Gaza in early 2009 (“Of sowing and harvests,” My word is my weapon, 4 January 2009). Despite the distance between Chiapas and Gaza, Marcos stressed that their experiences made the people of the two territories feel close to each other.

It is worth recalling Marcos’ words: “Not far from here, in a place called Gaza, in Palestine, in the Middle East, right here next to us, the Israeli government’s heavily trained and armed military continues its march of death and destruction.”

Linda Quiquivix is a critical geographer. She can be reached at www.quiqui.org.

Jimmy Johnson is an organizer in Detroit. He can be reached at johnson [dot] jimmy [at] gmail [dot] com.